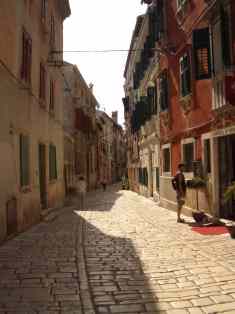 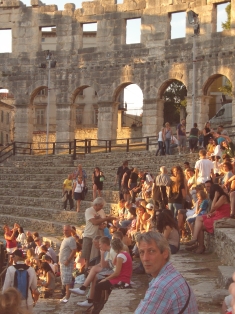 When we decided to take our annual holiday with my step-daughter, we opted to go somewhere neither of us had been to before and having travelled extensively as a couple as well as during our single days, we were looking for the ideal destination. Having Googled and questioned friends who’d waxed lyrical about destinations, we made our decision: the Republic of Croatia.

We took the best options for our rand in July and flew Etihad Airways via Abu Dhabi to Manchester, from where we drove to London-Stansted Airport to catch our Ryan Air flight to Pula in Croatia. The some three-hour flight to Pula proved surprisingly easy on this budget airline.

Arriving in Pula proved a traveller’s dream as in spite of this being quite a small airport, operations were smooth and ground staff friendly, our arrival being made even warmer by a native Croatian now living in the UK. Her prediction was that we would ‘loove this coontry’.

Our BMW family-sized rental car was in excellent condition and after a week proved very economical, as we got an upgrade without asking.

Arriving in Pula, situated on the coast, we were keen to get to our digs in Gracisce, about a 40 minute drive inland, where we’d rented an apartment. We had the two-bedroom unit to accommodate us and my step-daughter.

The drive from Pula proved a delight, passing old stone houses, ruins, churches and dry-stone walls (yes, the Romans were here too, same as the Greeks), vineyards, olive groves and cornfields, surrounded by breath-taking landscapes including mountains and woods in a smooth ride on pristine roads.

Road signs were clear, our map easy to navigate and arriving at our destination proved the cherry on the proverbial; Gracisce’s old entrance was too narrow for a 4-wheel vehicle but we turned into the old town square and admired the arch anyway to commemorate our first picture-perfect stop.

Our traditional Istrian stone home for the week proved spacious, modern and clean inside, lovingly renovated with open plan kitchen, dining room and lounge, and a veranda that offered a direct vista of an historical little church, one of two in this small village of 467 inhabitants: the Church of St Euphemia, built in 1383 and undergoing renovations, as were so many of the aged buildings in the region.

The architecture is reminiscent of Italy, although it seems much cleaner as the mostly stone buildings with their wooden shutters, some of which are painted in bright shades of green or blue, made for an eye-pleasing experience on this, our first day in Croatia.

I must mention that we were planning to drive further south, towards the larger tourist attracting towns and cities such as Split and Dubrovnic but after two days, we were so enchanted by this region, we decided to kick back, stay put and take day drives to the surrounding towns and villages, of which the closest large town was Pazin.

During one of our drives, we spotted large posters advertising Jimmy Cliff (he of Reggae fame and now inducted in the Rock ‘n Roll Hall of Fame) and Jack Johnson, American folk-pop laid-back musician’s concert to be held in Pula the following Saturday.

We stopped at a cafe in Pazin to enquire about how to go about booking our seats for the concert and the proprietor told us to follow her in our car to the tourist office in town, where we’d be assisted. WHERE do people get in their car for strangers to show them the way in this day and age?

We sauntered to the Castle of Pazin, described as the biggest and the best-preserved medieval fortress in Istria, which also accommodates the Ethnographic Museum of Istria and the Museum of Pazin. The fortress is located on a cliff overlooking an abyss, of which many mythical legends are told.

Shopping for supplies proved cost-effective, the local gniocci was recommended, one of the many dishes ‘borrowed’ from neighbouring countries such as Italy and Slovinia but ‘perfected the Istrian way,’ and we were NOT disappointed! Rich in flavour and tasting more of potato than pasta, I prepared these little dumplings with fresh garlic, sweet fresh tomatoes, herbs and local lean pork chops on one of the nights we decided to eat in.

We also found a little oil and wine store in Gracisce, where we purchased truffles in truffle oil but were not impressed and we were later told the black truffles, which we prepared with pasta, were not as tasty as white truffles. The white truffle oil, on the other hand, is delicious and opens a whole new culinary window of opportunity for my aspirations in the kitchen!

Dining out in Gracisce (pronounced Gratchitschki and dating back to Istria’s Bronze and Iron Ages) proved a triumph in one of the two local eateries, Gallignana, which is housed in yet another historical building, complete with a map of the old town painted on the exterior wall. Wild boar stew, fresh calamari, pasta, fresh garden salads and delectable sweet treats with 2 beers and a carafe of wine for 2 proved a superb, homely choice. The local wine proved easy on the palate and easier on the pocket than Coca-Cola!

We returned to what is described in the Frommer’s Guide as one of the prettiest towns in Croatia, Rovinj (also known as Rovigno because of its close proximity to Italy) often as excursions, shopping and dining in this charming town proved a major attraction for the three of us. I’d describe beautiful Rovinj as a cross between Portofino, Venice and Bellagio (on Lake Como) but on a smaller scale. You could happily lose yourself in the narrow, smoothly worn cobbled pedestrian streets.

Located on the western coast of Istria, this is the biggest Adriatic peninsula and a mere hour’s drive from Trieste in Italy and 500km from Vienna. The Mediterranean climate makes this a popular choice for Europeans to visit and has only 15,000 inhabitants, of which most are engaged in tourism, the fishing trade, agriculture, which includes the manufacture of tobacco, wine and viticulture.

Rovinj’s rich history and interesting architecture makes this a must-see destination. The daily fresh produce market in the town square overlooking the Adriatic, clothing and gift shops proved affordable and delightful: we did the girly thing as the bargain-priced beach-wear, with pretty sundresses costing under R200 proved irresistible. We stocked up on the delicious locally produced honey, complete with honeycomb, fresh berries, grapes and salad greens – again at bargain prices.

The city is built on the foundations of an insular fortification dating back to the Bronze Age and Iron Age, from the 2nd to 4th centuries. The baroque church of St Euphemia with its slender bell-tower dominates the magical city, which overlooks Valdibora Bay on the north and the picturesque Bay of St Catherine on the south side.

The sales lady on the dock at Rovinj was so charming and cute, one could not blame one’s husband for agreeing to buy our tickets for a cruise in the rust bucket, which proved an amazingly smooth sailing vessel. We savoured a delectable, simple lunch of the fresh catch of the day, complete with chunky French fries, Greek salad, local wine and soft drinks – at R300 per person for the cruise around the peninsula of Rovinj via the many small islands to Pula return, complete with an hour’s stop at a pebbled beach, with further views of the small islands – and topless sunbathers.

The concert in Pula proved a triumph, with a well-behaved audience comprising tourists and locals, with only one person behaving badly: an over-zealous security official –  I guess this is universal – steroid babies with plenty muscle, low EQ…

This event was very special as it’s not often one gets to attend a pop concert in a genuine Roman amphitheatre, where gladiators battled! The Pula arena happens to be better preserved than the Colosseum in Rome, albeit about half the size. Jack Johnson’s (we are fans now) To the Sea proved most fitting when performed in this historical theatre, offering vistas of the sea through its magnificent arches. And Jimmy Cliff as opening act was a delight to watch (born in Jamaica in 1948) as the audience, ages ranging from toddlers to grandies, was swaying and singing along where prompted along the lines of Wonderful World, Beautiful People.

Villages and towns, from seaside beauty to mountainous splendour, including Porec, Fazana, Labin, Rabac and Pican are so worth the visit, and we cannot forget visiting the Jama Baredine Caves, where tours are conducted daily, with strict attention paid to preserving the environment of these historical caves and its animal life.

We are hooked on Croatia.

This review has also appeared in Diversions magazine, https://www.all4women.co.za/1139397/lifestyle/travel/castles-concerts-croatia, and http://www.travelwrite.co.za