I’ve always loved driving, even when I got car sick as a little girl, I liked gliding past beautiful scenery. This usually included forests and the ocean along the magnificent Garden Route of South Africa. Garden of Eden, Wilderness and Knysna spring to mind as we lived in George at the foot of George Peak, which is part of the magnificent Outeniqua Mountains.

Memories of sitting on a thick cushion to see through the passenger window of my father’s first car, a green Opel Kapitan, which is now described as 1950s executive-class transport, are precious. The car seemed huge to a little girl and my job was to look after the picnic basket, ensuring nothing rattled as we were driving, with our little black Manx cat, Beertjie (little bear), who loved riding in the car and positioned herself on the backrest of the rear seat, with a wide-angle view through the oval-shaped rear window.

Scenic drives still soothe my soul and living in the panoramic State of Victoria of Australia, I constantly discover new routes to explore. Andrew, the aviator, would prefer to fly but to keep the volume down at home, he will sometimes find himself in the car with me and I know he ends up enjoying the ride almost as much as I do. 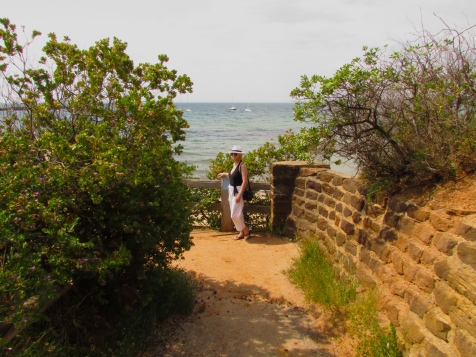 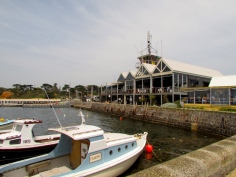 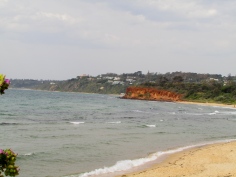 Last Friday we had a break in the rainy spring weather and drove from our patch overlooking the mountains of the Yarra Ranges to the Mornington Peninsula as I was in desperate need of breathing in the ocean air and gazing out to sea.

I embrace being a constant tourist in my own backyard and this drive delivered joy and beauty in abundance. It took us a mere hour and 10 minutes to reach the town of Mornington, which we’d never explored before but only drove past on our way to Sorrento, which is a favourite haunt of mine.

Mornington was on her best behaviour, with a warm spring sun smiling down over her and a gentle ocean breeze delivering that magical scent I’d been longing for. Her long golden beach and red cliffs beckoned but first, we had to find a restaurant with an ocean view to dine at.

Well, we could not get any closer to the bay, unless we opted to dine on a boat. The Rocks overlooks the yacht basin and is next to the yacht club. Vistas of jetties, boats and pretty beaches made for the best location one could wish for.

The service was superb, the wine, a sparkling rose produced on the Mornington Peninsula, delicious, and the smell of cooking fish proved enticing enough for me to order a fish platter. Sadly, our chosen dishes were over-priced and ordinary. My fish platter was slightly dry and uninteresting and Andrew’s fish burger disappointing too. Plating was unimaginative and we ordered golden fries, which were scrumptious, to pair with our fish as no side-salad, fries or sauce accompanied my platter. The mussels were tasty and fresh, though.

However, nothing was going to spoil this perfect view and our joy shone bright as the couple at the table adjacent to ours started chatting to us. They were delightful and I was not surprised to discover they were Italian by origin and have embraced living on this gorgeous peninsula for many years. Rosaria and Sisto were sent by the gods, who weave the tapestries of life, when people drift into our orbit to leave their mark, often for a season, a reason or forever.

Once our new friends departed, after we’d exchanged contact details and agreed to meet up soon, it was time to stroll on the warm sand and dip my toes in the ocean. No, I did not have a swim as the kelp was creating its own unique tapestry in the surf and I was satisfied simply getting my feet caressed in the gentle waves. 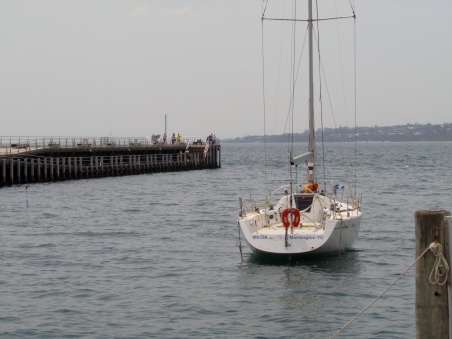 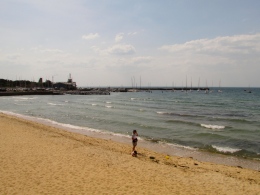 Mornington on the Mornington Peninsula is a visual treat.

On the way home, we listened to a diverse mixture of CDs. South Pacific, performed by Jose Carreras, Kiri Te Kanawa, Sarah Vaughn and Mandy Patinkin. Yes, an unusual mix but it was an old-fashioned sensory overload complementing our gorgeous drive. Memories of my father’s beautiful tenor voice singing Some Enchanted Evening came flooding back and I almost had to flick away a tear.

Our second choice after that impressive musical recording was The Beach Boys. Some may snigger but those boys created some incredible music that has withstood the test of time. Hearing Don’t Worry Baby and God Only Knows brought back memories of my first beach party, where I had a taste of Old Brown Sherry, and falling in love for the first time. Remembering the innocence and dreams of a teen, thoughts of having few regrets washed over me.

Living in a country village makes good television desirable as we are some distance from the city. SBS on demand is my current choice for getting cosy on the sofa and Breathe, the story of Robin Cavendish, the longest living responaut in Britain, who was affected by polio at the age of 28, made for excellent viewing. The MBE died in 1994 and his wife Diana, a driving force behind his fighting spirit, is played by the lovely Claire Foy of The Crown. Andrew Garfield is superb in the role of Cavendish.

Another gem, which I’d never heard of, is A Little Chaos, starring the beautiful Kate Winslet, Alan Rickman, Stanley Tucci and the enigmatic Matthias Schoenaerts. Rickman plays King Louis X1V, who employs Kate’s character in the creation of a garden at his Versailles palace. Romance in the shrubs, for sure, and I noticed 48% of viewers reported it a rotten tomato. I disagree and found the movie enchanting with superb acting by the stellar cast.

A further indulgence that has come to my notice, ideal for armchair travellers, is the newly relaunched live webcam at Tau Game Lodge in South Africa’s Madikwe Game Reserve – it should come with a warning, ADDICTIVE  – see for yourself at http://taugamelodge.co.za/main-lodge/live-webcam/

I’m not keen on TV series anymore – too many and sadly, often, the same old same old storylines, formulas and plots. However, I was hooked on the first series of Riviera, starring the mesmerising Julia Stiles and veteran actress Lena Olin, whom I first saw in The Unbearable Lightness of Being many moons ago. The cast includes Jack Fox, who certainly is a fox and from the acting royal family Fox. James Fox is his father, Edward Fox is his uncle and the charming Emilia Fox is his cousin. It’s in the genes…

I was thrilled to see the second series of this riveting saga about the dark side of the art world was now streaming and I promptly binged, watching ten episodes in three days. This is what happens if my spouse does some cross-country flying and I’m working back home. I hope I don’t have to wait long for series three… indulging in the visuals of those dream locations on the French Riviera, which I fell in love with years ago, is a delicious treat.

Fun with fashion and the yummy mummy

Continuing with springter, which has become my new preferred season, I’ve been indulging in spring fashion, whilst never taking my eye off my beloved winter warmers as the weather continues to fluctuate between the two. I’m not complaining as I get to wear my soft cashmere and mohair sweaters half the time, then get to savour the essence of spring on some warmer days.

Why am I not complaining? We’ve already endured a few scorching days and they were grim reminders of my dislike of heat. My body simply was not designed for it and even as a little girl, I used to faint when exposed to hot sun for long. Somehow, it changed briefly in my twenties, when I lived in Cape Town and spent summer days on the beach but I think what probably made it bearable, back then, was plenty of water, a fresh ocean breeze most days, the freezing cold waters of the Atlantic and handsome hunks bearing gifts of iced lollies and Campari and soda. Whenever we did venture to the warmer Indian Ocean side on that magnificent peninsula where two oceans meet, beach time was brief and dining in the cool shaded hubs of Gordon’s Bay was preferable.

Diversity is the fashion hero of our times as anything goes. I’m thrilled to see the soft, flowing femininity of the late Seventies being back on trend and I am besotted with kimono tops, palazzo pants, floral dresses and gypsy-style skirts gracing our wardrobes again. I’m also chuffed (delighted) to have unpacked some such finds, which have been stashed in boxes during our renovation process, so, it’s like having a new wardrobe, unwrapping my vintage stash. 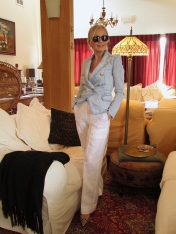 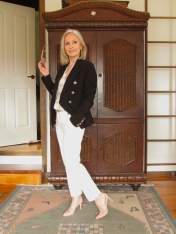 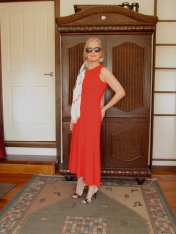 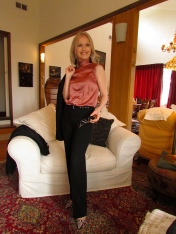 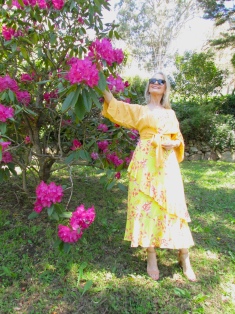 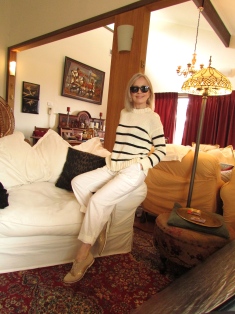 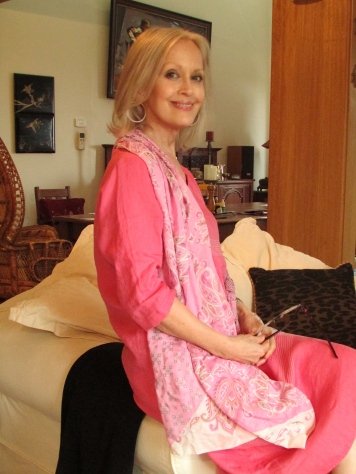 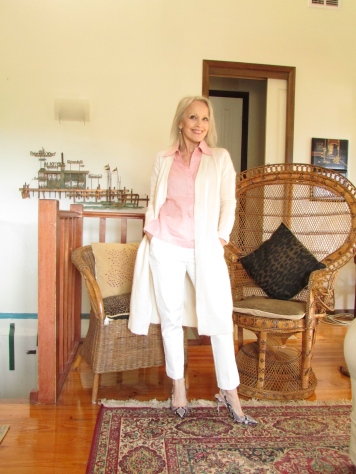 The casting agency contacted me a few weeks ago to appear in a commercial for Dingo Cement and I was cast as the visiting mother-in-law of a cute young couple wishing to impress her with their attractive new patio floor.

The accomplished talent playing my daughter in the commercial is Katrina Conder and we agreed casting was pretty accurate as we could see a resemblance in our appearance. We had plenty of giggles, getting immersed in our roles, with Katrina often cooing, “love you, Mum,” and me chirping back, “love you too, possum.”

Driving to the shoot location was sheer bliss, as the road from our Yarra Valley to Narre Warren is mostly countryside strewn with pastures, hills, paddocks and scenic beauty. Horses, alpacas and vineyards are included in the scenery along the way. 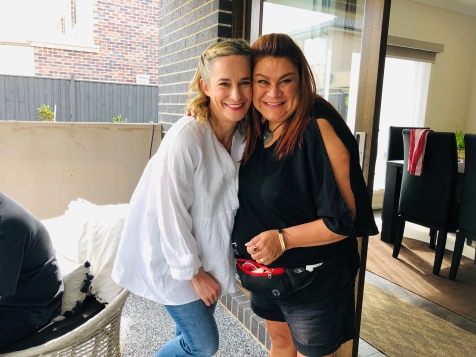 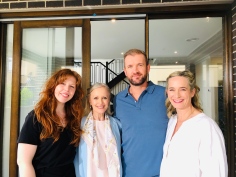 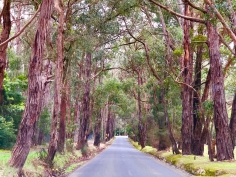 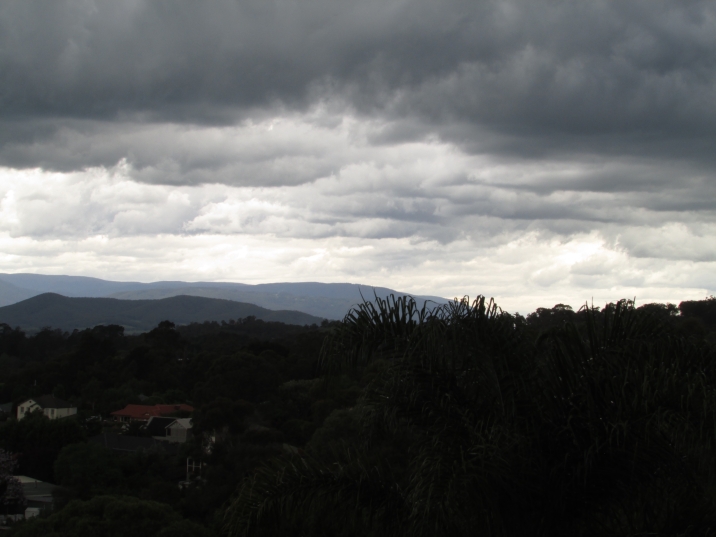 Filming was on a feistily windy day and our wardrobe stylist Imogen Walsh, and make-up and hair alchemist Natalie Corteling had their work cut out. I tell you, our hair felt a bit like cement after all the hairspray used to make our dos withstand the elements but fun was had by all.

Cheers to the good life – let’s live each day as if it’s the last hoorah. It is impossible to feel jolly every day but it’s worth a try…