On this, our second flight in the Sling 4 over the Bass Strait, I found myself less nervous as the Roaring Forties, the Tasmanian wind, and ocean, were calm. As much as I love the ocean, when flying in a small aircraft, it is heartening to see land so as not to feel totally ‘at sea.’ After all, this strait is believed to be twice as rough as the English Channel and twice as wide at about 200 km , with a maximum depth of 155 metres.

Flying over the Mornington Peninsula, which was mostly shrouded in cloud from Coldstream, visibility allowed for enough gaps in the fluffy stuff to see land and beaches. It seemed a short hop over the Bass Strait, which delivered crystal clear skies. The sight of Cape Wickham, which is the northern tip and our entry point to King Island, brought a wide smile to this passenger’s face.

Our destination, Currie, is a charming little port almost halfway up the western coast of the island and on such a clear day, it was evident that agriculture form the bulk of King Island’s industry, including cheese, beef, dairy, teamed with the delectable fruits of the ocean, rock lobster.

After a smooth, 1.5 hour flight and a gratifyingly gentle landing, we were picked up by the manager of the Airbnb we were booked into. I was so astounded at the sight of her vehicle, which was a brightly painted pickup of undetermined age and in need of some body repairs, I forgot to haul out camera and iPhone. As for the interior of this artistically adorned choice of road transportation, I believe some of the agricultural sand, seed and sea shells scattered in the interior of the vehicle, could see a whole new mobile farm sprouting forth in no time if some water could find its way in there too. I did manage to snap a picture of the colourful Caroline’s second vehicle, which is just as artistically adorned as her airport pickup, this one serving as her town car, seen parked outside her pottery studio.

Our arrival at Lighthouse Rocks B&B was nothing short of spectacular.  The vivid colours, murals, quirky exterior and interior, reminded us of the bohemian Seventies, when surfers, artists and boho not-always-chic made for ideal island vacations. Ah, say you, but this is 2018. Exactly, and this spacious abode takes you back to a different time, which is part of the charm of escaping to an island, albeit just for a few days. 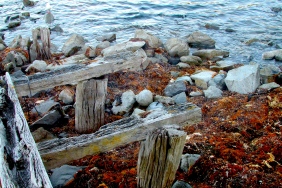 Pictured above, our dinner at the Currie Club, art and boho design at our B&B, and the Currie Lighthouse and harbour almost on our doorstep.

As one of three islands forming the New Year Group, and one of over 330 islands that make up the state of Tasmania, King Island has a welcoming disposition.

Unbeknownst to us until our arrival, it was the Festival of King Island (Foki, I kid you not) weekend, with horse, horse-and-buggy racing, and music of several genres on offer. Sadly, the jazz session had come to an end by the time we landed. Our landlady, being a jazz lover and all, advised she was afraid of running late for our airport pickup as she had indeed been enjoying the concert.

Naturally, the art in our little weekend villa was all her doing. I’d say her son, who owns the establishment and is a marine biologist currently working in Fiji, must be chuffed about his artistic mom, complete with flowery straw hat, flowing flower-power skirt and girly walk, as she adds panache to the town. Reportedly Currie is the largest settlement of about 600 people, of which the current population of King Island is estimated at 1,600.

At The Boathouse, The Restaurant with no Food,  you bring your own food and drink but if you liaise with Caroline, she could arrange catering for an occasion. On our final evening, we spent a quiet evening here, savouring a picturesque island sunset and vistas of the quaint harbour on the calm Tasmanian sea. A pilot and his companion were cooking stir-fry for their dinner under the stars and offered us a taste of their delicious meal, which they enjoyed at a secluded little table facing dockside.

The quirky location has become a popular film and photographic location and on our first day, we observed the renowned chef Tetsuya Wakuda of Sydney at work while being filmed by an international film crew. 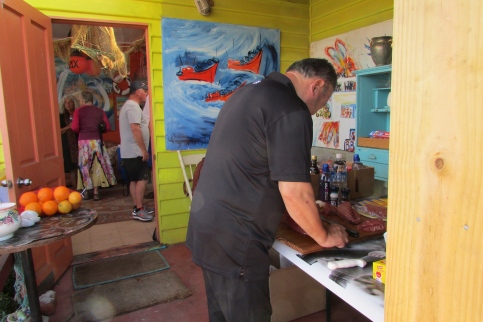 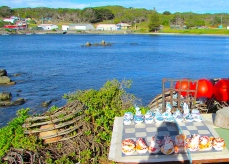 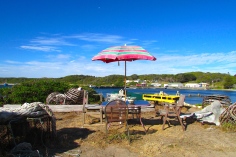 Pictured above, chef Tetsuya on a shoot at The Boathouse, views from this restaurant with no food, and a blue-tongue lizard spotted along the path.

Included in this film shoot and happy to discuss their craft, we had a brief conversation with Ueli Berger, cheese master and John Wiseman, international photographer. Ueli is based in Burnie, Tasmania at The Heritage cheese factory, lived on King IslandI and worked as head cheese maker at the dairy from 1998 till 2008. In 2008 Lion bought Lactos which is now The Heritage, where he is now Technical Director. This friendly Belgian came to Tasmania in 1975 as cheese maker to Lactos. He now travels to King Island every few weeks to oversee operations.

On one of our walks, Andrew was pleased to find a chair near the harbour he thought was made for him, G.O.D’s Seat, in memory of Gladys Olivia Day, a respected deceased local resident. Just another touch of whimsy on the island.

Pictured above, Andrew finds his perch, the Calcified Forest, Currie Harbour, the honesty box at The Boathouse, and the dinky Currie Museum.

Two of the world’s best golf courses, according to Craig Tamley’s article in Traveller Australia of August 2016, are located on the island. Don’t expect high levels of sophistication around the island but I am told glamour is evident at the golf clubs. The hospitality, beauty, history and interesting sites we visited make for a most desirable and relaxing island getaway, as sophistication was not our focus on this visit.

With 145 km of coastline, the wind and solar renewable power generation in use befits the island’s drive towards eco-friendly resources.

Daily air services between Melbourne and Tasmania make this an easy destination and I suggest at least a leisurely week to explore the many sites and relics, from shipwrecks to settlers’ graves of long ago, who showed true grit. The site of the Cataraqui disaster saddened me immensely, so many lives lost, but my mood lifted at the intense, stark beauty of the Calcified Forest.

We saw the little penguin colony beach at Grassy but of course, the little creatures were out to sea, only to return at sunset. 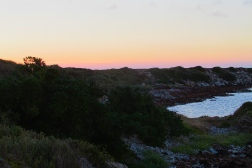 Pictured above, kelp on the beach, Tasmanian island sunset and a whale bone from days of old when whaling was an industry here.

Walking or cycling in Currie is recommended and we met some interesting folks who’d arrived for the festival. We joined them for a drink after a hearty meal of wallaby shank for Andrew and deep-fried scallops for me at the local Currie Club. Our new friends included a charter pilot and an executive of a large boat charter company based in Hobart, as well as a charming couple who flew in from Devonport with them. Contact details were exchanged and we look forward to spending time with our new friends in the very near future.

King Island is a place where everyone will know your name in no time and the warm hospitality and picturesque sunsets will make you linger much longer – http://www.kingisland.org.au

2 thoughts on “Finding G.O.D’s chair on King Island – and other quirks”