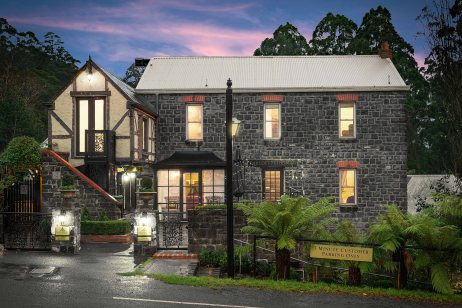 If you think travelling to Australia only involves kangaroos, surfing and people in funny hats in the outback, think again! This country has a myriad sophisticated, quirky and magical surprises in store.

Travelling to Melbourne for the first time five years ago on a much-anticipated holiday triggered an avalanche of change and a whole new life in a new country for us, which took five years of planning, involving much weighing up of pros and cons of leaving South Africa and moving to Melbourne lock, stock and smoking barrel – and cat!

Our plan was simply to go on holiday to see the country where my husband’s father was born and meet the Australian relatives.

Our first port of call was Melbourne and we were amazed by the clean and efficient way the city was run. After a road trip to Sydney through the New South Wales Highlands and returning to Melbourne via the sublime beauty of The Great Ocean Road, we got down to exploring this city and its surrounds further.

Service is key, and for starters, banks are smaller, the service is personalised and staff is extremely helpful and friendly. I had a flash-back of the service orientation of the old Trust Bank, where I had my first bank account in South Africa…

We have since settled in a charming outer-eastern suburb of Melbourne, with our home on stilts lodged firmly into a hillside overlooking the Yarra Valley, a meandering wine region and mere minutes from the Dandenong Ranges, which is adored for its mountainous terrain, spectacular birdlife, fern forests, rhododendron gardens and often eccentric lifestyle choices.

“Come quickly, I’m drinking the stars” – Dom Pierre Pérignon is reputed to have uttered this line when he experienced the result of putting bubbles into still Champagne that first epic moment in time. He did so through the discovery of secondary fermentation, a winemaking process that is still embraced today.

What, say you, does that have to do with winemaking outside France? Domaine Chandon in the Yarra Valley is part of the Moet & Chandon dynasty, one of several such estates now enjoying global attention outside of France, this one less than an hour’s drive from the city of Melbourne. The estate produces premium sparkling wines utilising the same grape varieties and techniques used in the Champagne region of France.

It has become my bubbles of choice – and certainly less pricy than the French variety! Remember, Australia is much further from France than South Africa, so, do the math.

The rose is my new passion as it ticked all the boxes – beauty in a bottle!

Master Chef Australia started a global trend of televised culinary creativity and I assure you, this is a great place to be if you enjoy fabulous food! Loads of fresh local produce, plenty of organic farming and most of the trendy cafes competing for supremacy in the delicious but healthy dining market, ranging from all types of Asian cuisine to European-influenced modern or classic Australian food, which indeed, is a fusion of all that influenced this cosmopolitan haven, where every culture is celebrated, especially in its cuisine.

The general practice here is not to tip waitrons as their fee is included in the price but as service is mostly excellent, if so inclined, one is welcome to leave a donation in a bowl at the counter.

In fact, we’ve not had a bad meal here yet and top of our list for delicious dining, complete with vistas of the Silvan Dam and the Yarra Valley beyond, is the recently reopened Coonara Springs Restaurant in Olinda in the Dandenongs, where Adrian Upward, well-known chef patron, who’s food alchemy started in Melbourne many years ago, has returned to the region after several years abroad.

The owners, who actually have origins in South Africa, spent three years reimagining and refurbishing this historical property to befit its origins as far back as 1893, when local indigenous people used to travel here for the healing powers of the natural spring, which is still enjoying pride of place on the seven-acre garden property atop the mountain, where you could find yourself in the clouds on a cold, rainy day in winter.

The slow roasted Aga lamb is my current favourite, whilst the rhubarb and liquorice dessert not only proves to be art on a plate but also on the palate!

By the early Twentieth Century, the Dandenong Ranges had blossomed as a popular tourist destination for urban dwellers partial to the cooler climate and fresh mountain air.

Coonara was purchased in the 1940s by the internationally acclaimed American opera singer Grace Angelau, who was food editor for The Argus newspaper.

By the 1960s Mrs Joyce Bankin and her famous scones with homemade jam and clotted cream had become a household name for visitors to the region.

Also in Olinda, The Loft in the Mill is a most romantic bed and breakfast, constructed with ancient bluestone salvaged from Melbourne’s 150- year-old road and lane renovations and uniquely handcrafted to create magnificent Mill and Carriage House abodes.

To us, this turned into a bucket list holiday destination that became our home, where so much reminds us of our beloved South Africa, yet, with flavours, beauty and nuances all its own.

Healesville is a charming village and a day visit to its Wildlife Sanctuary should be mandatory.

For accommodation options in the Dandenongs and Yarra Valley nearby, contact Peta Rolls at Valley Ranges Getaways – www.vrgetaways.com.au/accommodation

The historical Puffing Billy, based in Belgrave, should not be missed.

The William Ricketts Sanctuary pays homage to the Aboriginal lifestyle and spirituality, complete with unique sculptures depicting that era.

For more information on the Yarra and Dandenong Ranges of Victoria, go to http://www.visityarravalley.com.au and http://www.visitdandenongranges.com.au – hope to see you soon, mates, no worries!